Harris came to ESPN from WPGH-TV in Pittsburgh, Pa. where anchored the weeknight 10pm news show. Harris has more than 30 years of experience in television and radio news.

A native of Norfolk, Va., Harris graduated from Old Dominion University with a bachelor’s degree in speech communication. In 2003 he was honored with a Distinguished Alumni Award from the University. In 2004, he was the keynote speaker for Old Dominion’s 100th commencement ceremony.

Among his other honors, Harris was part of SportsCenter’s Sports Emmy-winning efforts in 2004 and 2005, and a recipient of the Silver World Medal from the New York Festival Awards, Robert L. Vann Award from the Pittsburgh Black Media Federation, and an EXCEL Award from the Hampton Roads Black Media Professionals.

Harris is husband to Stephanie, and father to Bryce and Tyra. He has been a proud Jack and Jill dad for the past 4 years. He enjoys playing bass guitar and is an avid golfer. He scored an ace in a charity tournament in Las Vegas in 2014, winning a car in the process.
Speaking At
The Impact of Celebrity on Activism
It’s Never Too Early to Invest and Grow Your Money 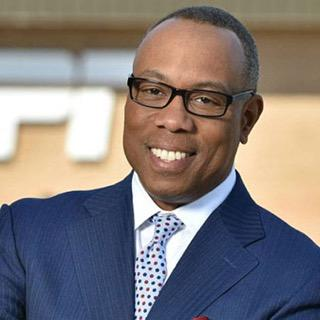